The Dalhousie of 1943. K.C. Laurie of Oakfield. President Stanley’s strengths and weaknesses. The 1944 issues with Laurie and McGregor Stewart. Trying to force Stanley’s resignation. The battle begins, November 1944. And ends, February 1945. Publicity good and bad.

"The Dalhousie that Colonel K.C. Laurie now superintended in 1943 was heavily permeated with war. King’s College had one hundred young naval officers in training, trooping across the campus past the Murray Homestead to the dining hall (where the old gym was), doing their early morning exercises in front of King’s, and practising their signals the rest of the time in semaphore and Morse. There were uniforms everywhere one went. Halifax was thronged with people: lineups at all the downtown restaurants, especially good ones like the Green Lantern; taxis difficult to find; the city and its institutions bursting at the seams. The sheer grimness and griminess of Halifax in that wartime had to be seen and experienced to be understood. One rather starchy New Englander, John Marshall, from the Rockefeller Foundation, found Halifax in April 1942 the dirtiest city he had ever visited, and the public amenities virtually non-existent. Halifax’s public library was housed in one small and dingy room in City Hall, and operated on a budget of under $6,000 a year. Perhaps Marshall might have remembered that Halifax had been the centre of the Atlantic coast war operations for three years, and for every service, navy, army, airforce, and whole fleets of merchant ships; the strain of it was showing. 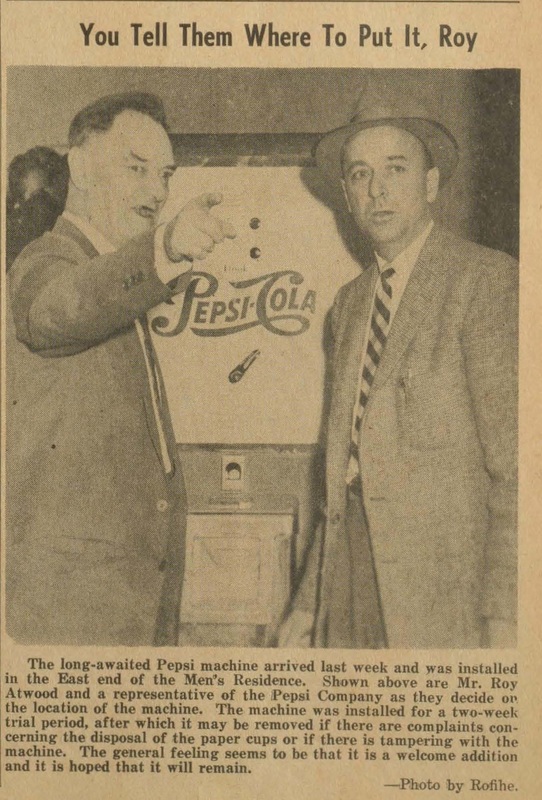 "The students were no better off than anyone else. The usual student boarding houses were expensive and tended to be crowded out by wives and families of servicemen. Wherever one went on campus, there were stories of harsh treatment of students by Halifax landlords and landladies; you would hear the stories in classes or at Roy Atwood’s gym store. The latter was the nearest approach to a student common room on the whole campus. Atwood started it in 1930 by arrangement with President MacKenzie in the old gym, and after it burned down in 1931, he moved to the basement of the Arts Building, then in 1933 to the new gym. Much talk and philosophy was dispensed there. One student remarked that talk with his fellow students was the most valuable part of his Dalhousie years, 'time to sit around and see where we were going and what to do about it.' Roy’s was the one place on campus you could do it.

"War or no war, students were students. Life and dances, work and flirtations went on. In the same 1941 issue of the Gazette that condemned three provincial premiers (Pattullo of British Columbia, Hepburn of Ontario, and Aberhart of Alberta) for refusing to discuss the Rowell-Sirois recommendations, an advertisement for Cousins Dry Cleaning suggested other interests than political or academic:

In whispering taffeta, velvet, sheer, In net or rustling satin, The Tech Ball finds her more at ease Than does a class in Latin.

Ah, she’ll not decorate the walls, Nor 'sit them out' in dozens, She’s learned that to be really chic Her dress must go to Cousins..."