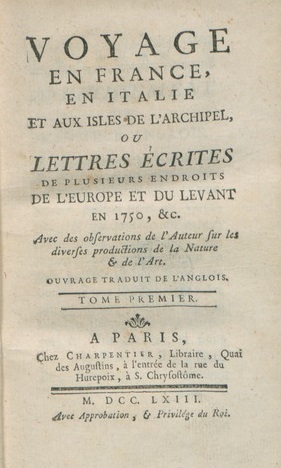 A travel narrative from 1763

In eighteenth century industrialized Britain, the genre of travel writing began to change as mobility and literacy increased among the emerging middle classes, and capitalism found fertile ground in newly urbanized environments.[11] With the transition from the agrarian to the urban, standards of living were dramatically revolutionised, altering the fundamental structure of family units, gender roles, labour expectations, and social organization at large. The application of steam power in many industrial sectors galvanised the development of related technologies, including the printing press, leading to a rise in literacy and an explosion of print productions across Europe.[12]

The consequent improvement of urban infrastructures enabled various aesthetic, social, and cultural developments, particularly ephemeral media: newspapers, pamphlets, posters, and so on. Citizens, now eager consumers of serials and political periodicals, found themselves more engaged with and aware of a burgeoning national identity on an international stage. The rise in literacy and the accessibility of transportation meant that travel experiences could be related on a greater scale, and the genre of travel writing was developed into two distinct categories: exploratory and touristic.[13] Accounts of exploration resulted largely from science-based and state-sponsored commissions to gather data on a variety of scientific or ethnographic topics, such as topography, geography, biology, botany, and history.[14]