These “Letters of Marque” newspaper ‘scraps’ come to us from the James McGregor Stewart Kipling Collection at Dalhousie University where a vast collection of Kipling’s works are housed, including scrapbooks created by dedicated Kipling devotees. 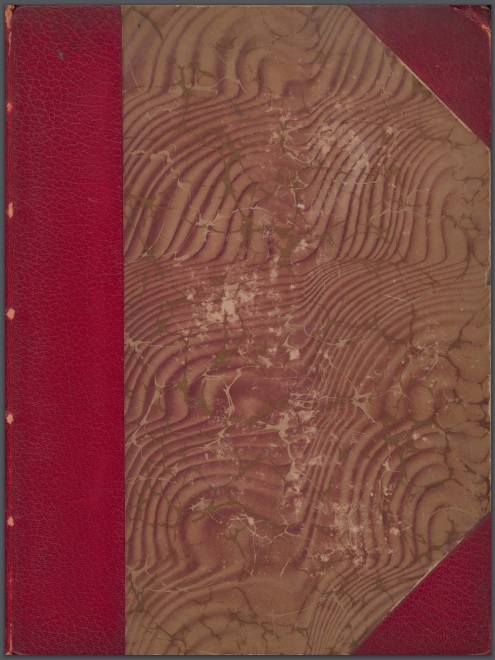 Cover of the Garth Scrapbook

The scrapbook containing Kipling’s early works in the Pioneer Mail was compiled by Sir William Garth (1854-1923), a British lawyer and advocate serving in Kolkata, India from 1885-1913. An esteemed member of the King’s Council, Garth was also dedicated to the arts and letters, and was an avid collector of first editions and works by modern writers. Rudyard Kipling, in particular, stood among the ranks as one of his favourite writers, and he developed his interest in Kipling’s work early on while Kipling was still a journalist in Allahabad, India.

According to James McGregor Stewart in his Rudyard Kipling: A Bibliographical Catalogue, Garth’s “tour of duty in India included the years of Kipling’s journalistic career there, became an enthusiastic admirer of Kipling’s works.”[1] During his appointment in India, Garth collected newspaper clippings of Kipling’s articles, travelogues, short stories, and poems published in The Pioneer Mail—for which Kipling served as editor—and pasted these into a scrapbook shown in the exhibit here.

Included within Garth’s scrapbook, “Extracts from the Pioneer Mail: Being Rudyard Kipling’s Contributions Thereto During the Years 1887-1890,” are the complete “Letters of Marque,” as well as a series of anecdotes regarding Kipling's travels abroad to Malaysia, Singapore, Hong Kong, China, Japan, America, and Canada from March – September 1889, which were eventually collected into From Sea to Sea and Other Sketches, Letters of Travel in 1899. Garth collected these as they were printed in the Pioneer Mail, no doubt allured by Kipling’s wanderlust, and carefully preserved them within his collection.

Ellis Ames Ballard (1861-1938) was presumably the first to acquire Garth’s scrapbook following his death in 1923, when his impressive collection of literature and first editions were sold to Sotheby’s, the prestigious auction house, in London. Ballard, also a devotee and collector of Kipling’s works, amassed a great deal of Kipling titles, and valued Garth’s scrapbook immensely. In his privately printed book, My Kipling Collection, Ballard states that the value of the personal collections and scrapbooks he had acquired “greatly assist in determining the authorship of much unsigned material which otherwise could not be definitely identified”[2]. In describing the value of the scrapbook itself, Ballard states: “The Garth Album is of such importance that I have included [it] in the catalogue proper,”[3] likely due to the verifiability of its contents’ origins. Stewart likewise mentions this in his bibliography: “while [the Garth scrapbook’s] probative value falls short of that of the Crofts collection and the Kipling Diary, nevertheless it has been accepted as prima facie evidence” of Kipling’s original works.[4] 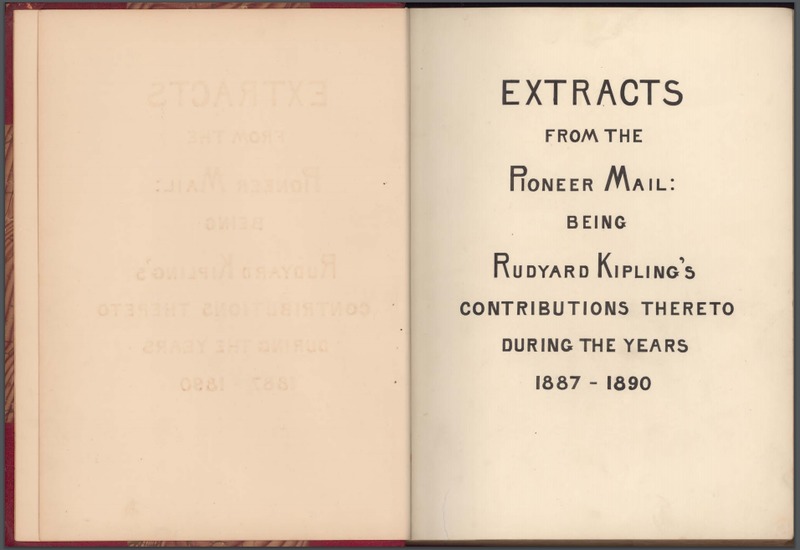 Title page of the Garth Scrapbook

Garth’s scrapbook persists as an embodiment of his own reading experience and demonstrates a dedicated participation in the transmission and preservation of Kipling’s works. Little is known about Garth’s motivations for creating the scrapbook other than to collect works he deeply admired and which at a later date he may have wished to read again. However, the compilation of Kipling’s Pioneer pieces offers tangible evidence of Garth’s habit of sifting and reading through The Pioneer Mail contemporaneous to its publication, and his decision that Kipling’s pieces were significant enough to preserve.

This is what Ellen Gruber Garvey, in her book Writing with Scissors, refers to as ‘repertoire’ in scrapbooking: “the embodied practice of cutting, arranging, and pasting materials, and displaying the resulting books to others.”[5] In performing this act, Garvey argues, the scrapbook maker occupies positions of both reader and archivist, and engages in what Garvey calls “gestures of preservation.”[6] By choosing what to clip, paste, and organize in a particular fashion, the scrapbook maker offers a record of what is read, ensuring the personal ascription of value to and preservation of that material.

The transformation from the ephemeral to the permanent, the national to the local, and the general to the personal of the scrapbook’s contents likewise “preserves the mediated experience”[7] of the scrapbook maker, and situates them within a historical context alongside figures of their admiration, as in the case with Garth. Garth’s scrapbook endures as an expression of what he deemed necessary to save for a prospective audience, whether that be his future self or later generations who may take interest in his work. Indeed, he may not have considered how invaluable his scrapbook would become to Kipling scholars and collectors alike. His admiration for Kipling is transformed into authority on Kipling, as his scrapbook now serves to verify works that beforehand could not be confidently attributed to Kipling himself. In the annals of Kipling’s literary achievements, Garth’s album now stands alongside the tomes of an author he regarded most highly.

The Importance of the Garth Scrapbook 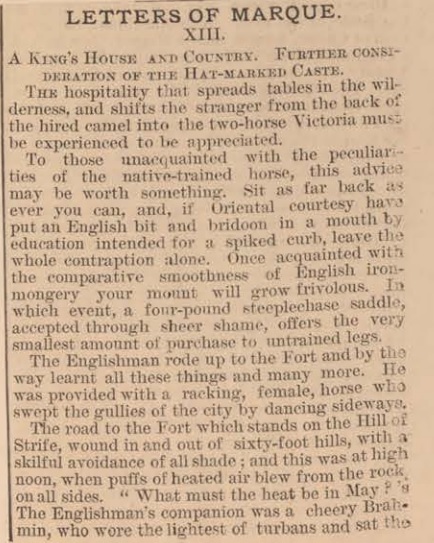 A clipping from "Letters of Marque"

There is a history behind the scraps of Garth’s clippings that likewise endure. Garth’s scrapbook demonstrates his presence during a time that saw the British Empire continuing to expand its imperial powers into nations far removed from its small island in the west. His tenure as a lawyer and advocate in India allowed him to experience life and engage firsthand with the colonizing efforts in the Indian subcontinent. It is fitting that Garth would be impressed with works created by none other than Kipling, the voice of British imperialism, and that he would comprehend his experience of India through the bespectacled eyes of Kipling, whose early works are imbued with British national identity. In his scrapbook, Garth expresses his relationship with Britain, and his admiration for ‘the globe-trotting Englishman’ who represented his nation’s colonial interests. Garth’s loyalty to his country is bonded into the pages of his scrapbook, effectively curating Kipling’s early writings and Garth’s own sense of national belonging. The great deal of care in collecting, organizing, and pasting these clippings into his book serve as a record of Garth’s physical contact with these materials, and his compulsion to preserve them from ephemerality.

In saving these works, the scrapbook verifies Garth’s anticipation of the collective value of Kipling’s early creative outputs before any of these narratives found themselves in published volumes. Moreover, it suggests his own vision of what qualified as literature of the British Empire. Eventually, these pieces were worked into anthologies proper, indicating Garth’s natural ability in apprehending the value of what, at first glance, may have simply been regarded as ‘daily news.’ Rather than seeing these stories as temporary objects of diversion, he recognized Kipling’s Pioneer works as belonging to a greater narrative—of his country and his ideals—perhaps without the consideration of how this narrative may shift over a century into the future and that his scrapbook would somehow find a place within that future.

In ways that he may not have imagined, Sir William Garth's scrapbook lives on as an archive, preserving his experience of reading Kipling for the first time, of making sense of life in a colonized India, of a time before the fall of the British Empire. It is an archive of life itself, “hold[ing] its maker’s past and embod[ying] a life of reading and saving.”[8]