Travel Writing as a Colonial Project 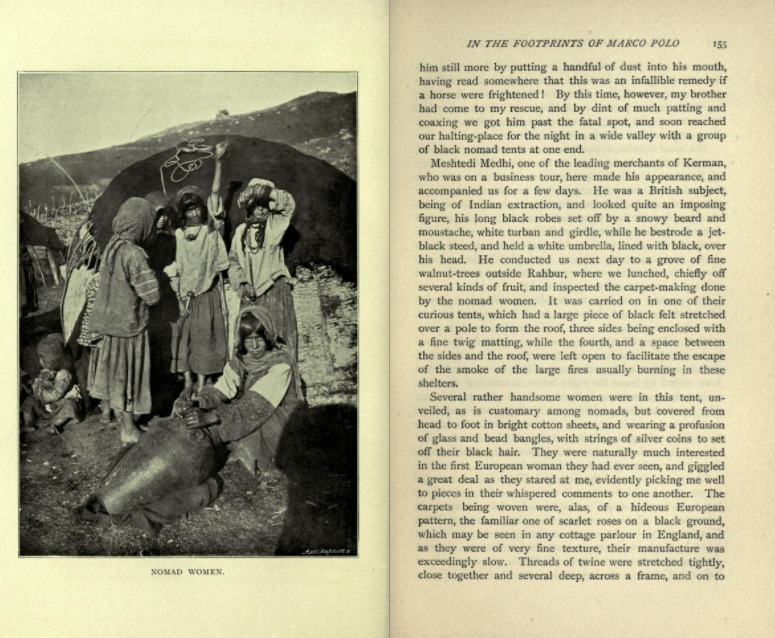 An excerpt from Ella C. Sykes's travel memoir
Through Persia on a Side-Saddle (1898)

Nineteenth century British artists and travel writers, consequently, had already internalized discursive modes of describing and relating to ethnic natives, and this representational process became referred to in post-colonial theories as ‘othering.’ Carl Thompson states that this process is firmly embedded within the mode of travel writing, in which “one culture depicts another culture as not only different from but also inferior to itself.”[15] More than in the picturesque or other landscape aesthetics, travel writing is uniquely able to situate two cultures against each other by introducing and reinforcing pejorative associations against one culture while delivering, Thompson writes, “a consoling, self-congratulatory message to the privileged, middle-class Westerners who are its principal readership.”[16] The act of othering functions to elevate the cultural identity of the writer while diminishing the ethnic identity of the individual represented to function as a homage to, and to advance the polity of, the British Empire. This act, however, is not exclusive to British travel writers, but to many Western European travel writers who likewise exhibited colonial and expansionist policies. The demonstration of imperial prowess in travel narratives afforded the medium the grounds to vindicate the expansion of the empire. By temporalizing other lands as ancient and empty, travel writing demonstrated the need for these locations to be developed and populated with their own cultural likenesses, thereby advancing the imperialist agenda, while garnering favour from a more politically interested middle class back ‘home’.

Despite the political program that seemingly motivated travel writing, these works were often unintentionally essentialist, so ingrained were such notions that travel writers unwittingly imbued these constructions into their works, sometimes without consciously propagandizing for the empire or kingdom to which they belonged.[17] Oftentimes, the works of travel writers possessed internal contradictions in which the writers exposed confusion toward the people and places visited, including anxiety, resentment, disgust, incredulity, and desire,[18] while also alleging curiosity and wonderment at the peoples encountered. This over-determination of emotions within travel writing revealed the subjective biases of the writer, but also the pervasiveness of othering during the nineteenth century, as it endorsed the perspective of the superiority of the British people and supplied a powerful discourse that enabled the occupation of lands that lay far beyond Britain’s small island. Travel writing of the nineteenth and twentieth centuries, therefore, is intimately bound with the rhetoric of colonialism, and was only one of multiple modes which relied on this discursive strategy to extend the reach of the British Empire.[19]