3. The Influence of the Picturesque 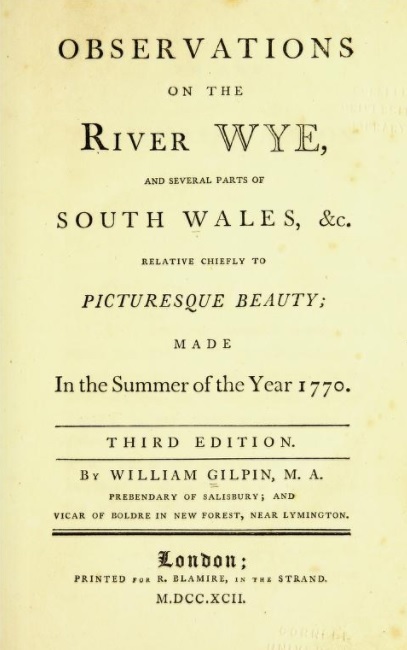 In a time when Britain’s industrial and diplomatic prowess became more apparent throughout Europe following Britain’s success in the Seven Years’ War, viewing the landscape became a coded endeavour. Describing the landscape developed alongside another mode of representation that was beginning to establish Britain’s view of itself as an imperial force: the picturesque painting. Promulgated chiefly by William Gilpin, a reverend who espoused domestic touring and a viewership of the British scenery in his publication, Observations on the River Wye, and Several Parts of South Wales, etc. Relative Chiefly to Picturesque Beauty; made in the Summer of the Year 1770, the picturesque provided an alternative way to apprehend landscapes.

The picturesque—the Anglicization of the French word pittoresque, developed from the Italian pittoresco—simply referred to any subject represented within a painting, quite literally “in the manner of a picture”.[1] It was not until Gilpin, and his contemporaries Uvedale Price and Richard Payne Knight, appropriated the term that it could took on its current and often complicated meaning.

← The Popularity of Travel Narratives
Painting and Viewing the Landscape →
A Brief History of British Travel Writing
3. The Influence of the Picturesque