Tourist accounts, perhaps touching on subjects such as geography, biology, botany, and history, focused more heavily on the subjective experience of travel. In the early stage of tourism, these accounts were written primarily by, or concentrated on, the travels of the aristocracy instead of the brazen bourgeois traveler, a figure that arrived later as industrialization democratized travel. 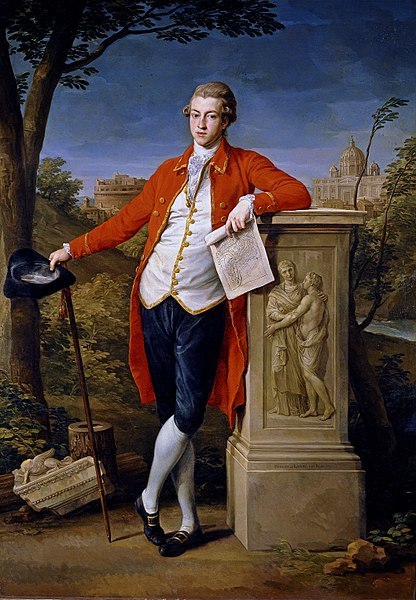 Francis Basset, a Baron, embarked
on a Grand Tour of Italy in 1777

Tourism was not an entirely new concept at this time, as the term ‘tourism’ had been coined in the eighteenth-century to identify those who embarked on the Grand Tour across the European continent. According to this early concept, tourists were young male aristocrats, occupying an enviable position of privilege, who voyaged to Italy and France to refine their tastes and accumulate knowledge useful to their rank, such as etiquette, language, history, and classical literature.[15] To expand the young aristocrat’s historical consciousness, he would visit Roman ruins and discover the antique origins of the expanding British Empire, and accrue a wealth of “cultural booty”.[16]

However, it was around this time that the term ‘tourist’ began to adopt its more pejorative associations as these young men also engaged in licentious and less prescribed ‘worldly’ experiences, thereby garnering an unpopular reputation. James Buzard delicately refers to this indulgence as a “series of ‘educative’, non-binding liaisons with foreign women of one social station or another.”[17] It was not until the democratization of travel that the term ‘tourism’ took on other meanings, although the ‘tourist’ category of traveler has remained contentious. As attraction for continental travel began to wane toward the end of the eighteenth-century due to the French Revolution and the ensuing conflict between France and Britain, continental touring became a less leisurely pursuit.[18]

Domestic travel took its place as tourist businesses began to appear with more frequency alongside an increase in railway lines, connecting the less travelled sections of Britain.[19] With the continuing growth of the middle classes and an increase in cheaper transportation, more people began journeying locally, and by the 1770s, domestic tours across Britain exploded in popularity, leaving behind the young privileged aristocrats as the sole purveyors of the European landscape and producing a new generation of tourists.