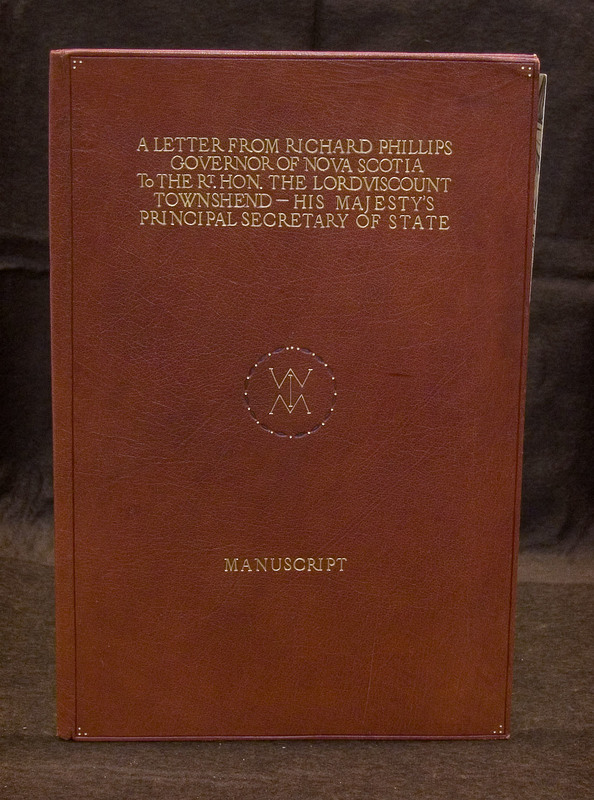 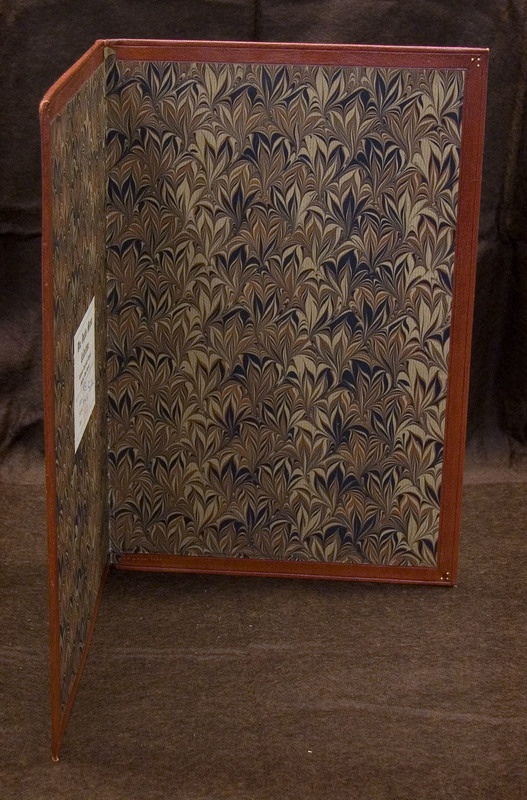 Item is a pamphlet case designed and handmade by Douglas Cockerell for a manuscript letter by Richard Phillips, Governor of Nova Scotia.

Binding Description:
A full brown morocco leather binding; blind tooled single fillet borders on front and back covers, three gilt dots in the inner corners of front and back borders, at top of front cover is the gilt title, A letter from Richard Phillips Governor of Nova Scotia to the Rt. Hon. The Lord Viscount Townsend – His Majesty’s Principal Secretary of State, centered on the front cover is the monogram “W.I.M” in gilt fillets encircled by blind leaf ornaments interspersed with gilt dots, the sub-title “Manuscript” is in gilt upper case letters and spaced evenly below the monogram; back cover has a vertical  rectangle in blind fillets set 6.5 cm. in from outer border, single gilt dots are in the inner corners of the rectangle , single blind fillets one centimeter from top and bottom inside the rectangle give the inner panel definition; leather turn ins have two blind fillet borders with one border next to the Cockerell marbled paper endpapers and the second border on the outer edge, three gilt dots are in the outer back and front corners of the  inside covers; “D.C. & SON 1934” in blind in the lower left corner of the back cover turn in; Cockerell marbled endpapers in complementary shades of brown, black and cream inks.

Special Feature:
The document being encased is an early and important one in documenting Nova Scotia’s early history.  The binding reflects this importance by displaying a full unabbreviated title in an elegant  and expertly applied type.

Edition Statement:
A unique binding for a protective pamphlet case which housed a letter from Governor Phillips to Lord Townsend, England’s Secretary of State.